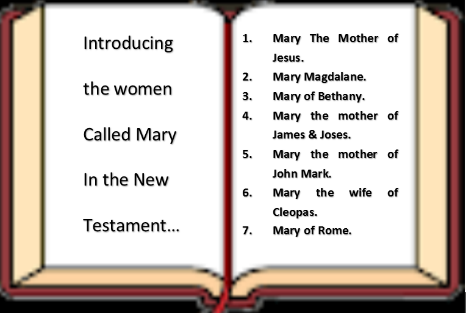 The name Mary we understand is a modern form of the Jewish female name, Miriam (the other variants being Maria, Mariam, Maryam). For instance, in the Old Testament, Moses’ elder sister was called Miriam.

In the New Testament, there were several important women called Mary that were specifically mentioned, especially in the various Gospels.

There was a time I couldn’t perfectly distinguish from amongst all the Marys. But once I was able to clear the confusion, it became easier for me to do so.

Hence this post highlights some things I learnt about the women called Mary in the N.T. One striking discovery was that all these Marys where one way or another associated with Jesus Christ and/or His Disciples.

The 7 Women Called Mary in the Bible

Bible scholars have been able to identify that there are seven Marys in the Bible. In this post, we will take a close look at all the people called Mary as the Bible tells us with a view to understanding them better:

In no particular order, we will now begin the journey…

This Mary was the one who found favour with God (Luke 1:30).

She was the virgin through whom Jesus was born; Matthew 1:23: the mother of Jesus.

She was the wife of Joseph, the ‘earthly’ father of Jesus;

She was also the mother of Jesus’ step brothers – James, Joses, Juda, Simon – and sisters. You know that Mary gave birth to other people apart from Jesus!

She was one of the four women that stood close to Jesus while on the Cross. The rest were her sister, Mary the wife of Cleopas and Mary Magdalene.

This Mary was from Magdala, from which Magdalene was coined in reference to her home town;

Jesus cast out seven spirits and infirmities from her, Luke 8:2. She later became one of the prominent women who ministered to Jesus.

This was one of the four women that stood close to Jesus while on the Cross. The rest were Jesus mother, Jesus aunty (his mother’s sister) and Mary the wife of Cleopas.

She was also the woman, first disciple and first person to see Jesus Christ after resurrection. Hence, she was the first to bear the testimony of the resurrection to the rest of the disciples (John 20:13-18).

This was the sister to Lazarus (whom Jesus raised from the dead) and Martha;

This Mary was from Bethany. During an outreach Jesus had to that village, Martha, this Mary’s sister invited and hosted Jesus in their home.

This was the same Mary Jesus commended for choosing to listening to the Word while Martha was busy in the kitchen (Luke 10:38-42).

4. Mary the mother of James and Joses/Joseph

Two James easily come to mind in the N. T. One was the step brother of Jesus while the second one was the son of this Mary in focus. Matt 27:56.

This Mary was part of the women that ministered to Jesus, and even followed Him to the cross; Matthew 27:55-56.

This Mary sat on his grave after Jesus was crucified

5. Mary the mother of John Mark

This woman was a widow in Jerusalem, and she owned property in that place.

She made her house available for the disciples to gather for prayers, once the persecution escalated; Acts 12:11-17.

James had been kill by King Herod and Peter imprisoned. So the remaining disciples were hiding (or fellowshipping secretly) in this Mary’s house;

Peter after being supernaturally freed from prison made straight to show himself to James and the other disciplines who were gathered in this Mary’s home. From here, he left town and went to other places to continue ministering.

This Mary was also the sister of Barnabas, the one who sold his landed property and laid the proceeds at the Apostle’s feet (Acts 4:37).

Paul in his letter to the Colosians (4:10) exposed the relationship amongst Mary, Mark and Barnabas when he identified Mark or Marcus (John Mark) as the cousin of Barnabas, that is the son of the sister of Barnabas.

6. Mary, the wife of Cleopas

This was one of the four women that stood close to Jesus while on the Cross. The rest were Jesus mother, Jesus aunty (his mother’s sister) and Mary Magdalene.

Not much record was kept about the character of this Mary. However, the writer of the epistle to the Romans gave special recognition to this woman.

She was greeted and mentioned as the one who laboured greatly for the Apostles. At this point, Paul had joined the believers and had obviously benefited from the labour of love of this Mary. Hence, a special mention was made of her in his letter to the Romans.

This post took a look at the women called Mary in the Bible, with the hope that we can learn one or two things from each of them. What are your thoughts about them?