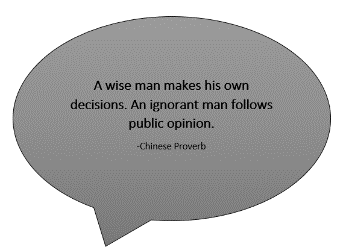 Public opinion might be a very powerful force but you should not let it shape who you are or what you become in life. In other words, you should live your life independent of public opinion.

You will experience avoidable levels of frustration if you always rely on public opinion to run your life.

I read of a Chinese proverb which says that a wise man makes his own decisions whereas an ignorant man follows public opinion. You have the right to agree or disagree with that statement but I believe there is a point in those words.

There will always be public opinion. But the choice is yours whether or not to follow it.

People will talk about you no matter what you do. So make sure you do the right things so that you will not have cause to be ashamed of yourself later.

Remember the saying “Vox populi, vox Dei” (The voice of the people is the voice of God).  Have you ever given a serious thought to that maxim? Or have you believed it completely simply because it is a popular saying?

Take another look at that philosophy and you will see that it cannot always be correct. The voice of the people most times is not the voice of God. So why let your life be guided by public opinion?

As you probably know, public opinion is not always correct. Much of what constitutes public opinion is born either out of the ignorance of the majority of the public or the deliberate acts of misinformation orchestrated by the people that have the power or the means to do so.

There are people that control or influence public opinion. If you are not one of such people, be sure that public opinion will not always be in your overall best interest.

You will be ruining your life if you completely pattern it after the opinions of the public. That is not to say that there is no time you can learn something from feeling the public pulse. But be sure to know where and when to draw the line.

Public opinion changes frequently. And you can not even change as fast as it does, so why fall for it?

How then should you handle public opinion?

If you know you are in the right just continue being right. Don’t shift ground to the wrong side on the strength of public opinion.

Public opinion may count but doing the right thing should count more for you.

Pursue your purpose in life and firmly resist the temptation to have sleepless nights over what people say about you. Those who live by purpose will not follow public opinion, neither will they be bothered by it. Be one of such people!

Even when public opinion favours you, as it sometimes will, you still have need to ride on its’ tide very carefully, so that you do not get drown by any means.

Those who praise you today will turn against you tomorrow. Thread cautiously.  Whatever you do, do not let public opinion control how you live your life.

What are your thoughts on this?

9 thoughts on “Should You Always Reckon With Public Opinion?”