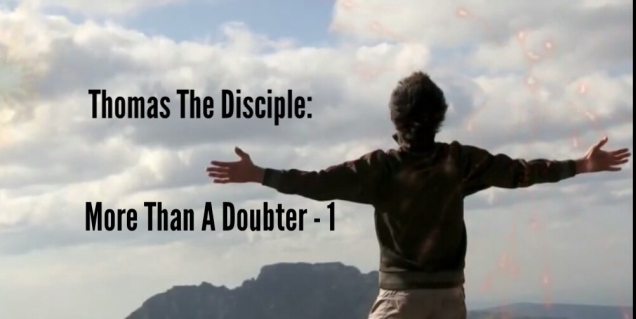 When you hear the name ‘Thomas’ in the Bible, what comes to your mind? If you are like most people I know, I guess your mind will immediately think of ‘the doubting Thomas,’ the incredulous member of the 12 disciples of Jesus Christ.

Thomas came to be associated with that uncomplimentary adjective when he (understandably) doubted the seemingly impossible news that Jesus Christ had risen from the dead. This was because as at the time the risen Jesus showed Himself physically to His followers, Thomas was away to only-God-knows-where.

But Thomas, one of the twelve, called Didymus, was not with them when Jesus came. John 20:24

While Thomas was AWOL, the news of Jesus’ Resurrection had broken out amongst His disciples giving them great joy. And Jesus had presented Himself to His disciples too. But Thomas would take none of that, saying, he would not believe the resurrection story until he saw Jesus face to face.

Talk about someone who says seeing is believing! That was our man, brother Thomas. Don’t you know at least one person in your life that is like that, who will not believe anything except he or she sees it? Or maybe you are even like that yourself!

Thomas had his wish come through, but not immediately. It took another eight days before the doubting disciple became a confirmed ‘believer’. That was how long it took before Jesus appeared physically again to the Disciples.

Of course, Jesus was not ignorant of the fact that Thomas had not believed the Resurrection story. Hence He said to him, “…Thomas, reach hither thy finger, and behold my hands; and reach hither thy hand, and thrust [it] into my side: and be not faithless, but believing” John 20:27.

It sounded like Jesus was saying to him, “Thomas, why do you doubt so much? Here, come touch me, feel me now… Are you convinced now?”

Thomas said to him, “My Lord and my God!” Then Jesus told him, “Because you have seen me, you have believed; blessed are those who have not seen and yet have believed. John 20:28-29

At that juncture, all the doubts in Thomas had vanished. With the overwhelming evidence right before him, he had no other choice than to acknowledge the ‘First Born from the dead’ as both ‘Lord and God.’

Therefore, beyond the popular view that portrays Thomas as a doubter, a sceptic or an incredulous person, the outcome of this recorded exchange between the resurrected Lord and this hitherto unbelieving disciple,  affords us one of the indisputable written firsthand evidence of the physical Resurrection of Jesus Christ available to us today. It is a valid record that after His Resurrection, someone actually touched Jesus by the nail marks on His hands and feet, and His arrow-pieced side.

This showed a solid and indisputable connection between the same Jesus that was crucified on the cross and the One that resurrected and showed Himself to His disciples that He lives.

Beyond being labelled a doubter for seeking a physical proof before believing that Jesus had resurrected, Thomas should be appreciated for the role he played in having Jesus present Himself again to His disciples (and to the world) in order to further verify His resurrection from death through a conscious physical examination of the resurrected body.

In what way do you relate to Thomas behaviour? Was his doubt justified? Your comments are welcome.

18 thoughts on “Thomas The Disciple: More Than A Doubter 1”