It’s been my desire to build a private library in my bedroom for a while now. To that effect, I have been acquiring scores of books covering many areas of interest such as leadership, productivity, parenting, character and talent development, faith, prayer, prosperity, evangelism, business, public speaking, and so on.

But as I am yet to build the appropriate shelf to arrange the books away as nicely as they should be, I have them temporarily stacked up on an average sized table placed at a far corner of my bedroom.

From there I can always take any book to read as often as I am able to do so. One obvious constraint I have with this arrangement is that the retrieval of any specific book is always difficult.

Most often than not, the title I want to read is always tucked in the middle of the others, or so it seems. Therefore, I always have to scatter a few others in order to get to the one I want.

This was the situation I found myself during the penultimate week of June 2016. I had scurried through the stack to fish out a nice book to read during the few days I took off work. In the process, I had inadvertently strewn a few other unneeded books here and there on the floor around the table, with the hope that I would rearrange them back later.

Little did I know that this was a sufficient invitation for my energetic 2 and 4-year old boys to help do further unsolicited scattering. I came back to the room several hours later only to find all the books scattered everywhere on the floor. Instead of the usual stack, what I saw was an empty table with all the books sprung everywhere on the floor.

I stood there dumbfounded. “What type of chaos is this?” I asked myself, without expecting any meaningful explanation from the two toddlers who obviously had a nice time scattering the books on the carpeted floor.

I quickly drove them out of the room and called my wife to see what these boys had done in the bedroom. She too could not believe her sight…. 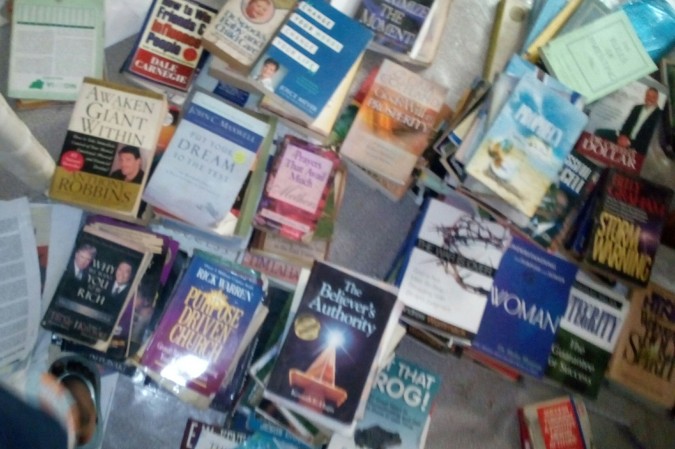 I was obviously not happy with the chaotic situation I met on the bedroom floor. But I would not ‘kill’ the children for it. I simply abandoned the room partly for a few days… I had more important things to do… It wasn’t until the third day before I returned to arrange the books back on the temporary ‘shelf’. And it took me almost three hours to get the job neatly done.

But I discovered to my utmost surprise that I had tremendous fun doing it. I skimmed through all the titles and had the books sorted according to their authors (I read authors as much as I read titles). In the end, I had all the books back and stacked neatly on the table till when the proper bookshelf would be provided.

Here was the most interesting part of the exercise of bringing order out of the chaos: I found two precious items that made me so grateful.

One was a diary I had kept about 8 years ago, which I didn’t know its whereabouts. As I flipped through its pages, I found poems, songs and other thoughts I had personally written down previously, which I had never shared with anyone. I came to realise that many of them would be suitable for posts on this blog in the weeks to come. Honestly, it will be my joy to share them with you.

The second thing I found was the last updated manuscript of a book I had written over 10 years ago which I am yet to publish. Our home computer then had crashed and unfortunately I couldn’t  recover the soft copy. So the surviving print out meant everything to me. But I couldn’t trace it until that day, due to a change in our accommodation then.

All I had before I found this one was an older version of the manuscript. Now I am grateful that I can now revisit the newest version, have it reviewed again and then hopefully have it published someday.

Although I was initially annoyed that my children scattered my books into a chaotic mess, it turned out to be a blessing in disguise. And out of what I perceived to be a disorderly situation, I found two treasures I thought I had previously lost. All things worked out together for my good, I might say!

Have you ever found yourself in a similar situation? Please leave a word or two in the comment section.