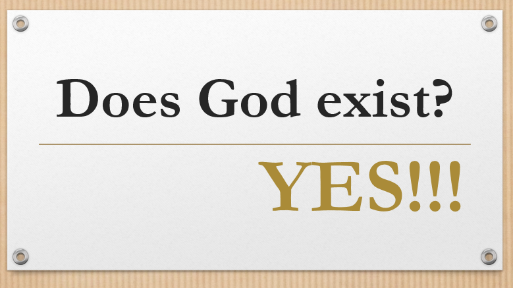 In this brief discourse, atheism shall be construed simply as the “belief that there is no God.”

Let me be upfront with this: I am a Christian and so I believe in the living God (the God with capital ‘G’). Those who follow this blog would know that already.

That said, I find it hard to fathom why some people find it so easy to claim that God doesn’t exist. I respect the fact that everyone has the right to believe what they want. But sincerely, to think that there is no God beats my imagination.

Recently, during an online interaction, I mentioned to a fellow blogger that I have never been in a close contact with any atheist. I have heard about a few notable public figures whom reports say they don’t believe in God. But I have never met any of them personally.

I am moved with compassion whenever I hear that someone doesn’t believe in God. “I wish they knew better!” I would say to myself, because “I know God exists.”

Several centuries ago, one of the greatest men that ever lived on earth declared in Psalms Chapter 14:1 that “A fool says in his heart there is no God.” The same thing was repeated in Psalms 53:1.

From these scriptures, we can see that anyone that says there is no God, is not wise at all. If that assertion came from me, you could discountenance it. But as it is the written word of God, one ignores it at one’s own peril.

Some other arguments about God are far easier to understand than to say that He doesn’t exist at all. For instance, some people reason that there are many ways to God. But in Christianity, we say Jesus Christ is the only Way.

In fact, Jesus himself during His earthly walk made some audacious claims about this when he said, “I am the Way, the Truth and the Life. No one comes to the Father except by Me.”

What was Jesus saying? Simply put, He meant “There is God (the Father) and I am the only Way to Him.”

106 thoughts on “To Those Who Say There Is No God”